The Hooker and the Hermit by Penny Reid and L.H. Cosway 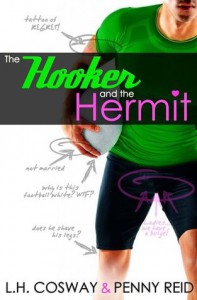 PJV Quickie: More books like this please!  I was nervous when Penny Reid said "don't expect this to be like my usual stuff" but I should not have doubted.  A nice blend of humor and intensity, The Hooker and the Hermit will be on my list of favorite reads this year.  (Also, once you've read the first chapter you'll think the cover is awesome!)

Ronan Fitzpatrick is Rugby's fastest rising star - a phenomenal hooker, maybe the best ever, but since punching out one of his teammates he's also earned the title of 'bad-boy'. He doesn't care about his image and he knows why he beat up his teammate - and would do it again - until he stumbles across Annie at the PR firm and wants to get to know her better. He hates social media but says he'll work on his image...if she's the one to help him do it.

Annie Catrel is a shy, borderline anti-social woman who works for a top PR firm and does her job well.  Annie loves her job because she can usually work from home, but she's also got an ironic secret: she's The Socialmedialite, a popular internet blogger who comments on the rich and famous.  When her firm puts her on the case of cleaning up the image of Rugby's latest bad-boy - a Colin Firth look-alike with a gorgeous Irish accent - she can't say no, and not just because her boss insists.

When they accidentally fall into a fake relationship, that's when things start getting real...

Short version:  I loved this!

Long version:  The Hooker and the Hermit was hard to put down.  As a shy person myself, I could easily relate to Annie: her desire not to be noticed, being shy around even her co-workers, all of it. And then she has Ronan practically thrown at her (or she was thrown at him) - he's famous and outgoing and all the things she's not.  But somehow they work.  I thought there was nice character growth for Annie, thankfully not with a 'magic penis' cure-all.  Lest you think I'm having an All-Annie-Love-Fest, I loved Ronan too!  He was cynical and blunt and is surprised when he realizes that he genuinely likes Annie; I liked his character growth too and thought the two of them nicely complimented each other's strengths and weaknesses.  There were secondary characters that were supportive but not scene-stealing, and I liked that even though the set-up was external, the basic conflict was between Ronan and Annie themselves.

I should also mention that the sexy stuff was hot - even when there wasn't any sex happening. <--Yes, you read that right.  Good stuff, I'm telling you!

One thing that I didn't get was the little blurbs at the beginning of each chapter, they were supposed to be different ways to catch a celebrity on camera, but they kind of seemed all the same to me. Maybe I missed how they related to each chapter?  I don't know...but it didn't pull me away from the book so *shrugs*

I was already a huge fan of Penny Reid, and while I own a few books by L.H. Cosway, I haven't read any of them yet. After reading The Hooker and the Hermit, I will definitely be going back and reading them!

Also, I really, really hope this one comes out in audiobook format, because I cannot wait to hear Ronan's sexy Irish accent!