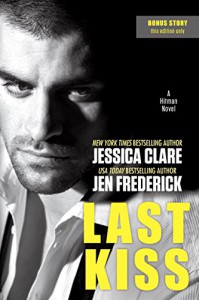 PJV Quickie:   Once again the writing team of Jessica Clare and Jen Frederick has wowed me! You wouldn't think that a heroine with Autism and a hero who's a cold-blooded killer would work together, but take my word for it, it works.  Sexy, sensual, funny, and dramatic, Last Kiss held me captive until the end.

Vasily is an enforcer for the Russian Bratva.  Life in the Petrovich Bratva has made him ruthless and hard. After the death of the current leader, Vasily has designs on the top spot and has been given a task to prove his loyalty - he must find a rare painting that was once owned by the Petrovich family but has disappeared over time.  If he can obtain it, the Petrovich Bratva is his to lead.  Vasily knows exactly who can help him find it - the computer hacker known as the Emperor.  There is nothing the Emperor can't find online, and Vasily will give him whatever he wants to find the painting.

Naomi Hays has been held captive for the past 18 months by a Colombian drug cartel. In order to survive captivity she made herself useful by funneling money into untraceable accounts for her captors.  She likes computers - they're logical and methodical and comforting. When she's the Emperor she feels safe and calm. But now she's been kidnapped again, this time by a severe Russian who wants her to find a painting for him.

Thrown together by fate, or necessity, these two unconventional characters find something special in each other as they travel across Europe searching for the painting.  But their time together is running out... Vasily knows Naomi must go back to her family, and Naomi knows Vasily won't want her anymore once he has the painting.

Having read and loved the previous books in Jessica Clare and Jen Frederick's Hitman series, I had very high hopes for Last Kiss.  We met Vasily in the previous book, Last Breath, and I was looking forward to knowing more about him.  I was also curious about the heroine, Naomi, because her brother spent the last book looking for her.  Can you read Last Kiss without reading the previous books in the series? Yes, but I would advise you to read them because it does give you more back story about the characters.

Last Kiss started out fast with Vasily trying to figure out how to take over the Bratva, and carrying out Naomi's "rescue" from the cartel.  Naomi has Asperger's, and is a computer genius, but she needs calm and familiar things, like her baseball cap.  She's thrown into chaos and Vasily must work around her "quirks" to convince her to help him. Their attraction grows, but it's the most unusual romance I think I've read.  Her germophobia and her tendency to become fixated on an idea made for some intense reading - sometimes funny and sometimes sad, often introspective, and always interesting.

We get both Naomi and Vasily's point of view in Last Kiss, and I think it brought a lot to the story as both characters have a lot of internal stuff going on.  Because of that, I didn't really 'feel' their relationship at first, but as I read it suddenly clicked and made sense. And then I loved it. The second half of the book sped along and dragged me with it, wanting happiness for these two with all my heart.

There's a lot of action, some suspense, an unforgettable trip to an exclusive sex club, and one of the most swoonworthy lines whispered by a hero, ever.