The Undoing by Shelly Laurenston 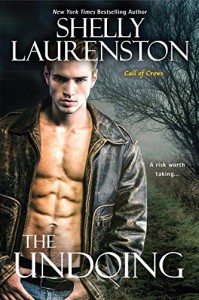 PJV Quickie:You guys, this series is so much fun. And sexy. And ohhhhhh! I love the viking lore, the sexy alpha males, the tough women in Freya's Crows...I could go on and on. If you don't have time to scroll down to the review I'll say it here: You want to read this series!!!

Jace Berisha was killed by her husband. Now she's one of Freya's warriors in a band of women called the Crows. The change in life of being the wife of a religious cult leader to an almost immortal warrior has been a big one, but Jace has the support of her sister crows - they all have a story, and they (kind of) respect each other's boundaries. Usually. As an introvert, Jace spends a lot of time trying to hide from her more outgoing sisters, but when she's needed, she's there.

A recovery mission to obtain one of Freya's bracelets goes horribly wrong, and a few of the Protectors, another of the nine clans, walks in on the chaos. They're there to collect ancient books, and don't expect the scene that is unfolding in front of them.  Ski Ericson is one of the Protectors, an owl-like clan of scholars.  When they learn of Jace's skills as a translator, they ask her to help with some ancient texts their having difficulty with.  Jace uses the time to get away from her wild and crazy Crow sisters while simultaneously getting to know Ski and the Protectors better.

We don't get a lot of Ski's history in The Undoing, which is actually fine because Jace has enough history for the both of them. What we do get is a vengeful goddess out for vengeance, a slow-building romance that is absolutely adorable, and a crazy cast of characters that I can't wait to read more about.  I could identify with Jace's introverted character, and loved the studious Protectors.   We also get to see how Kera and Vig from book 1 are doing, and there's more adorable canine goodness all over The Undoing.

Ms. Laurenston writes a great story between Jace and Ski while simultaneously making the overall series arc relevant and interesting.  Some of the viking lore and the events surrounding the coming Ragnarock, which they are trying to prevent, does get a little confusing, but overall I loved the story and the overarching story arc.  I would recommend reading The Unleashing before reading The Undoing.  I cannot wait to read the next book in the series, The Unyielding, which is Erin and Stieg's story.

I said it above and I'll say it again - this is a really interesting series full of viking lore, alpha men and women, and adorable dogs.  Add in the action, mystery, sex, and violence and you've got a winner!  If you like her other series (Pride and Magnus Pack books) this one is a little different but still keeps her signature over the top writing.