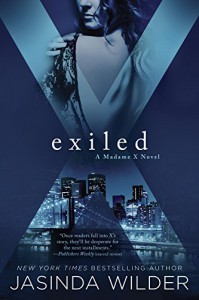 PJV Quickie:  Madame X was a surprise hit for me last year, and the second book, Exposed, left me waiting excitedly for the final book in the trilogy, Exiled. I want to say it was everything I expected, and while parts of it did have what I'd been hoping for in a conclusion, overall it was predictable and I'm embarrassed to say I skimmed over quite a bit. I guess you could say that I have mixed feelings about Exiled, and as a result, the trilogy as a whole.

The Madame X series has been my guilty pleasure ever since I picked up the first book, Madame X: amnesia, kidnapping, billionaire alpha-hole, illicit goings-on, a potential love triangle,  a  secret past, I loved it all.  So when Exiled was offered for review, I jumped on it - I had to know what was going to happen to Isabel (Madame X) - could Caleb change? Would she pick freedom or the devil she knows?  I had to know!

Exiled answered a lot of questions about Caleb's past, and Isabel's past. And while I was grateful for that, I didn't like the way it was told - Caleb told Jakob's story to Isabel, while Isabel's past was in flashbacks. Unfortunately, I found I didn't care for the flashbacks - to the point where I kind of skimmed them.  Most of the interaction between Isabel and Caleb in Exiled is about the past, and that set the pace for their relationship.

Logan stayed true to his character from the previous books, wanting to get Isabel away from Caleb and secure her affections for himself.  Which, wow, when I write that it looks pretty shady, which was not the vibe I got from Logan. He was actually almost too good to be true, and maybe that's why I found myself a little frustrated with Logan.

While I was happy Isabel was finally getting some personal growth, I felt like she was still wishy-washy about Caleb and after all that had happened I wanted her to choose herself over both men. As the story progressed, I realized that she had switched the "You" from Caleb to Logan, and that made me feel like her character had no sense of herself as an individual person, which made me sad.

My main complaint with Exiled was the use of deus ex machina on several plot points: Logan's injury, a pregnancy (insert eyeroll here over THAT whole plot line), the death of Isabel's parents...so much of it was predictable but I knew there would be a great story behind it - but there wasn't. I almost feel like the trilogy could have been pared down to two longer books, because Exiled was too long and rambling.  I don't know how I feel about the trilogy after reading Exiled - I loved the first two books but can I recommend them knowing what happens in the last book? Or recommend that you read the first two and then imagine your own HEA?  I'm on the fence.